1. THE BLUE DRAGON by Steve Richards

6. Parting of the clouds in the Himalayas, Pakistan

7. Sitting on top of the World – The Männlichen is a 2,343 metre mountain in the Swiss Alps located within the Canton of Berne.

17. Bluebonnets in the Hill Country of Texas

Science fiction films are often full of unbelievable scenery.  Such as islands flying in the sky or an Elvish house built in the trees. But the world in which we live is also full of fantastic places and strange natural formations that dazzle and amaze. And although people have changed the world beyond recognition, not all of the unique natural places have been lost. Beautiful mountains, turquoise water, amazing islands – our planet is truly rich in places 01. Phi Phi Island, Thailand 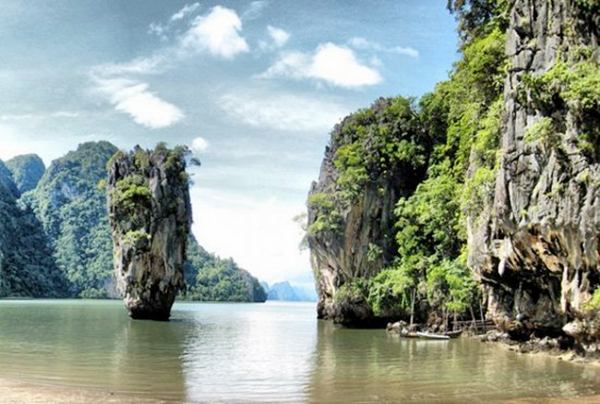 Phi Phi Island in Thailand.  located between the large island of Phuket and the western coast of the Andaman Sea. Most of these islands are not just sharp rocks, rising from the ocean. The clear turquoise waters and lush tropical greenery make this place a paradise on earth.
02. The crater of Nyiragongo, Congo 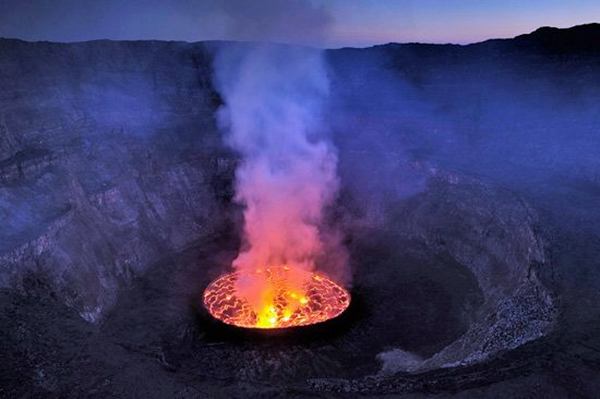 Volcano Nyiragongo – is a unique volcano with steep slopes, located in the Democratic Republic of Congo. Inside the crater of this volcano a lava lake has formed, which is constantly bubbling and foaming filling the night sky with a supernatural red glow. It inflicts heavy losses on the nearby villages and towns, both because of volcanic eruptions, and the poisonous gases and other lethal forms of seismic activity.
03. Arch Berry Head, Newfoundland, Canada 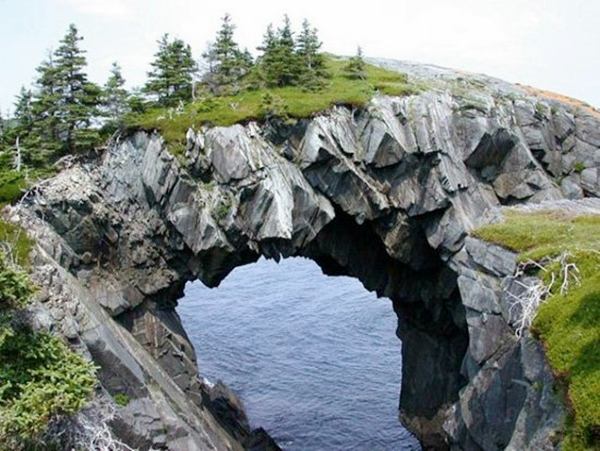 This beautiful arch is on the route Spurvink (Spurwink Trail) along the East Coast Trail in the Canadian province of Newfoundland. The Arch looks pretty impressive, and it is so large that it has become overgrowm with trees. Be careful when you get to the arch, as the trail itself leads to steep cliffs.
04. Pamukkale, Turkey 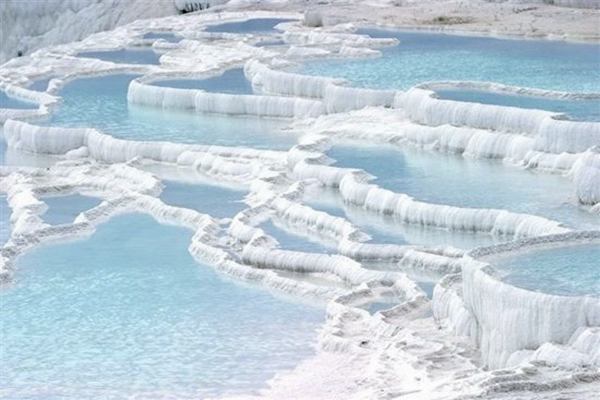 Water flowing from the hot springs, and calcium carbonate deposits on the large terraces of Pamukkale give a spectacular view, and on clear days the reflection of the sky adds a wonderful blue color to the water. As a result, this place is a bit like an enchanted ice palace, although the temperature is quite comfortable.
05. Pura Tanah Lot, Bali 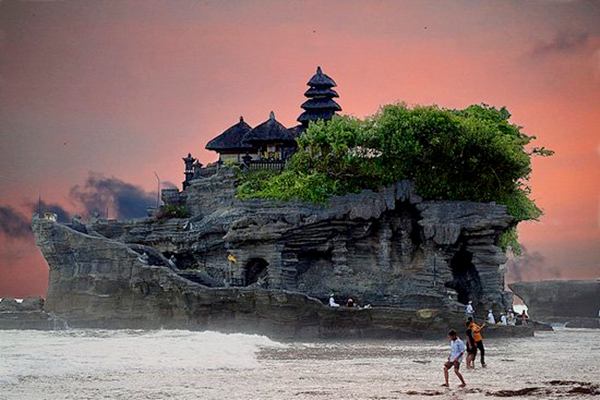 Pura Tanah Lot – the temple is situated on a rocky formation, jutting from the island of Bali. This is an amazing place, the silhouette of which, when viewed from certain angles looks like a fabulous ship.The temple can only be reached through a narrow isthmus. According to legend, it was a holy place, built by a Hindu Brahmin, and is guarded by a huge snake.
06. Tyantszu Mountains, China 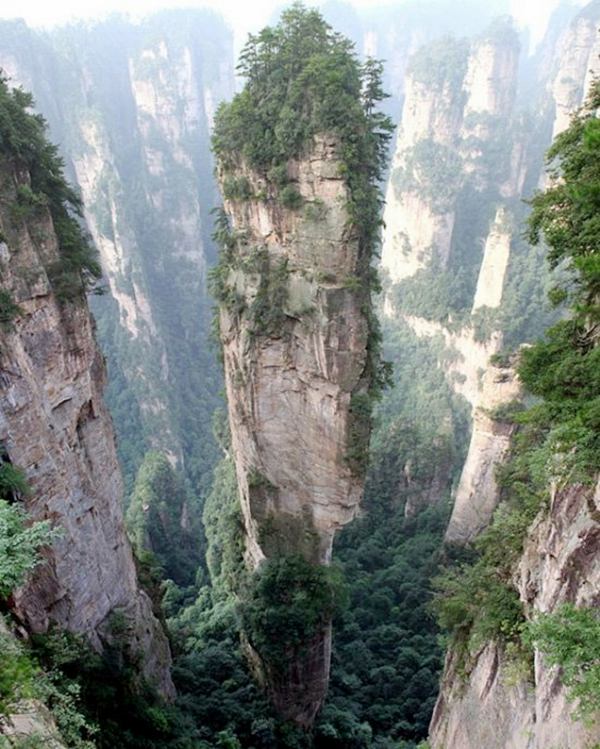 These mountains are a giant towering spiers, reaching several hundred meters in height. Decorated with lush vegetation. They seem to defy the laws of gravity, resembling floating monoliths as seen in the film Avatar. Mountains National Park, located in Zhangjiajie, Hunan province in the north, is recognized as a World Heritage Site by UNESCO. Balancing elongated mountains are the result of years of erosion, created by the expansion of ice in the winter.
07. Hamilton Pool Preserve, Texas, USA 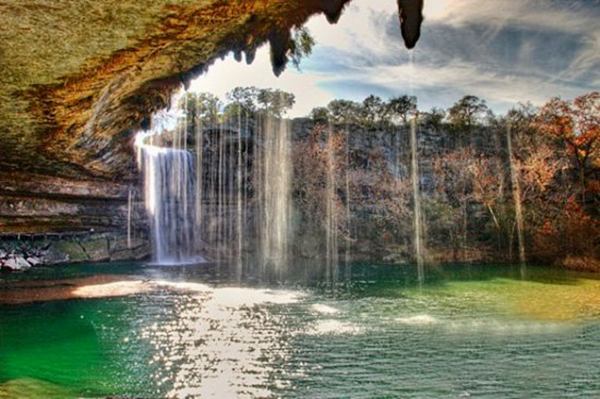 Hamilton Pool Reserve – is a natural pool, formed thousands of years ago in after major erosion. The pool itself is filled with amazing emerald water, framed by limestone rocks covered with lush ferns and moss. On the outcrop down the 15-meter waterfall that never completely dries up, even during the dry periods.
08. Las Kanadas, Tenerife, Canary Islands 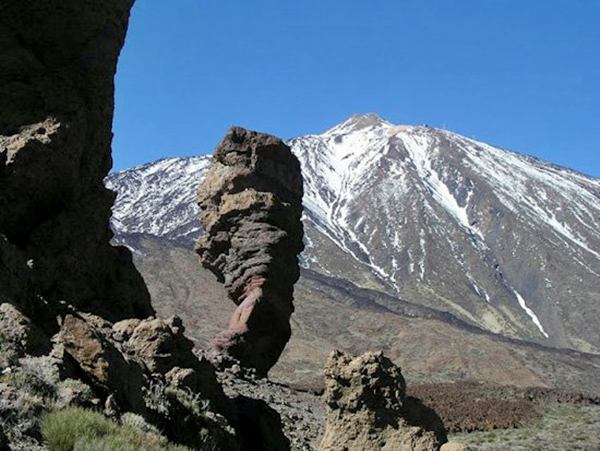 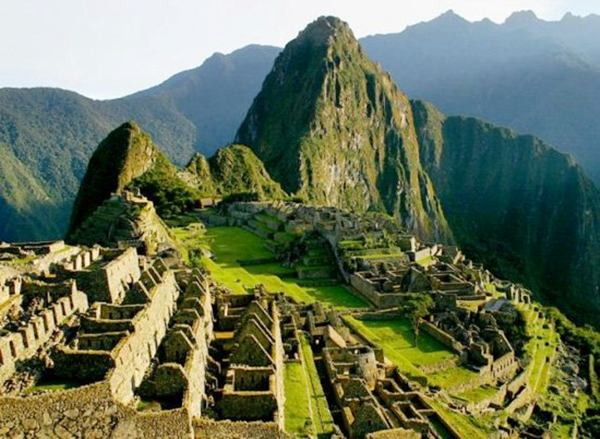 There are many interesting ruins around the world, but Machu Picchu is in this respect, a cult place. Located high in the mountains of Peru, surrounded by a  tropical forest, this place is simply amazing with its beauty. Once the most impressive creation of the Inca Empire, its giant walls, terraces and rampards seem to have been carved by mother nature herself in to the rocky ledges. Prior to 1911 this site was unknown until Hiram Bingham an American historian made the discovery.
10. Meteora, Greece 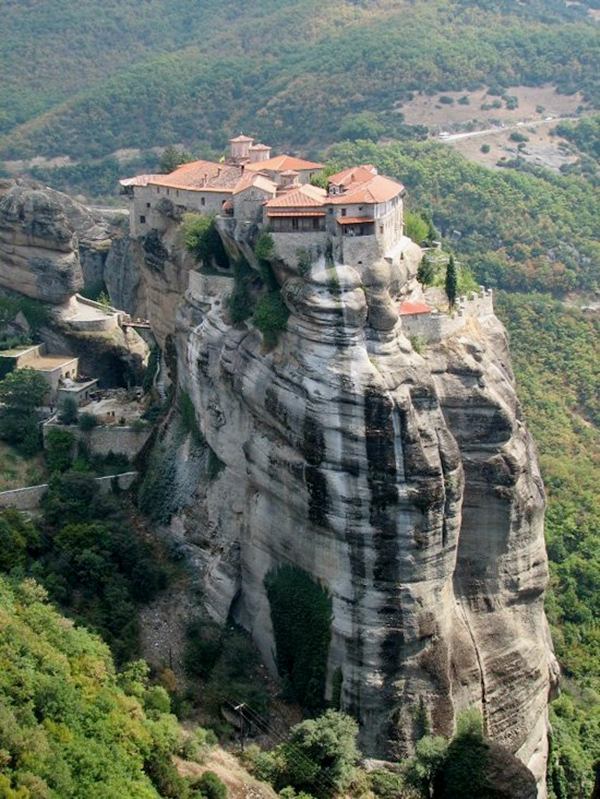 Meteora is a monastic complex in central Greece and  is located on the top of the cliffs, which reach heights of up to 600 m above sea level. These monasteries were built in impossible conditions, virtually no roads, lead to this perfect place of solitude, meditation and prayer.

Get goodies in your mailbox

find it on Top Travel Europe